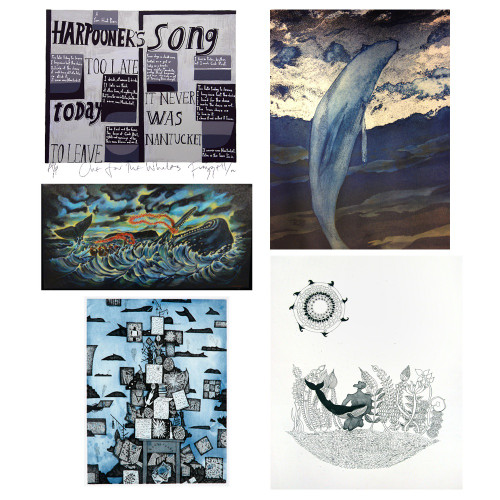 A portfolio of prints made for and donated to the National Whale Centre project by Dick Frizzell, Greg O’Brien, John Walsh, John Pule and Michel Tuffery. The notion of a whale print series in support of the National Whale Centre, Picton, started in July 2012 after a discussion with a number of the artists who participated in the Kermadec – Nine Artists Explore the South Pacific exhibition in 2011 (Pew Environment Group).

All five artists, including two associated with the Kermadec project, wholeheartedly endorsed the idea and over the succeeding months produced their prints with their favourite print workshops. Greg O’Brien and John Walsh worked with Michael Kempson, director of the Cicada Press at the UNSW College of Fine Arts, Sydney. John Pule made his work with the assistance of Marian Maguire of PaperGraphica in Christchurch and Dick Frizzell and Michel Tuffery worked with Donald James Tee and Glenn Richard Taylor at Artrite in Auckland.

Most of the editions are sold out and only 10 boxed sets have been set aside, with numbers 1 to 10 of each edition, for this portfolio of 5 prints.